It’s a stressful moment right before a test, and second grader Michael walks up to his teacher and says, ‘I think you need a moment to breathe.’ Although surprising to hear from a 7-year- old, wisdom like this is a common occurrence for the students at JFK Elementary School in Winooski, Vermont, who have studied mindfulness skills through a program called Modern Mindfulness. Remarkable behavioral changes, as well as academic improvements, are some of the benefits of mindfulness education seen across the country. (Rempel, 2013)

In their study with elementary school students, Flook, et al. (2012, p. 70) found that mindfulness improves executive functions, defined as “processes involved in planning, carrying out regulated, goal-directed activity.” A survey done by Modern Mindfulness at JFK Elementary revealed that more than 75% of students reported an improved  “ability to calm myself in challenging situations.”  (Modern Mindfulness, 2015) Results like this are hopeful for a country where “children and adolescents are experiencing stress at unprecedented levels.” (Rempel, 2012, p. 201) Vermont has a special need for effective coping skills because it “has the highest rate of identifying students with emotional disturbance in the country.” (Weiss-Tisman, 2015, April 29) 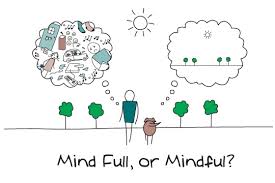 Mindfulness is learning how to reduce mental distractions, as the dog has happily achieved. It entails two main facets: “present moment awareness,” and “nonjudgmental acceptance of emotions and thoughts,” which is a process of allowing emotions and thoughts to arise without acting on them. (Teper, Segal, & Inzlicht, 2013, p. 1) Meditation is a primary tool in Mindfulness practice. A single object — often the breath — is taken as a place on which to focus to mind.

It is natural for attention to wander, just as the reader of this essay may be distracted at times by sounds or sight. The key is to notice when distraction occurs and to bring awareness back to the chosen object, like this sentence. (Flock, p. 71) As with any skill, mindfulness takes practice, and it is not limited to meditation; rather, mindfulness is a style of attention. Modern Mindfulness (2015) defines it as “focused, relaxed attention.” You can do any activity with mindfulness.

Mindfulness for Children in Vermont

There are several mindfulness education programs in Vermont that work with schools. Modern Mindfulness, which is based in Johnson, Vermont, has a substantial presence in the state. The video below offers a window into their unique software-based approach and its impact on teachers and students.  Soryu Forall, the director and founder, also discusses focus as a central concept in the program:

I interviewed Denise Casey, the Program Director for Modern Mindfulness, who has extensive teaching experience in schools and community settings and has practiced and taught mindfulness for seven years.  (Modern Mindfulness, 2015)  Casey has witnessed firsthand the positive changes for students.

Given the mounting evidence that mindfulness is a powerful tool for students, I asked Casey about the challenges to bringing mindfulness into our schools.

Casey hasn’t seen any concerns over the issue of separation of church and state, namely because mindfulness is a style of attention that can be taught outside of the context of religion.

The most challenging aspect Casey reported “is getting teachers on board. Teachers are exhausted and don’t want more curriculum.” She added, “But if they embrace it, then there is a good chance of success.” Another challenge for some teachers is that they need to approach the curriculum in a novel way: “It’s not this hierarchy of ‘I am the teacher and you’re a student and I know better,’ but with mindfulness we are all learning. We are all beginners.” It’s this key part of the success of the program that she has “really seen first hand at JFK Elementary School.” (Casey, D., personal interview, August 4, 2015)

One Middle Schooler, whom I will call Katrina, participated in the Modern Mindfulness program and was interviewed at the end of the school year by Chris Adams, a staff member at Modern Mindfulness. Here is an excerpt:

Katrina: “I don’t use mindfulness. Whenever I get stressed though, I just, I can take a break anywhere in the school. Probably the office or the SLC and I just, it doesn’t take me a while, it just takes me about five minutes to get myself less angry and go back to class safe and focused.”

Chris: “That sounds powerful, how do you, what do you do in those five minutes?”

Katrina: “I just breath. I don’t do anything much though. I just breath and focus on  something and I can be back in my class without anger.”

Though resistant, Katrina still benefitted from the 5-minutes-a-day lesson that she received during the school year. A second grader, whom I will call Sarah, said, “Whenever I have a lot of pressure, like on a test, I can do mindfulness and it just calms my body, and I don’t have as much pressure.”

How does mindfulness facilitate the emotional regulation seen in children like Katrina and Sarah?  According to Teper, Segal, and Inzlicht (2013, p. 4), awareness and acceptance work interdependently to strengthen executive control, which enables emotional regulation. This is illustrated in the figure below: 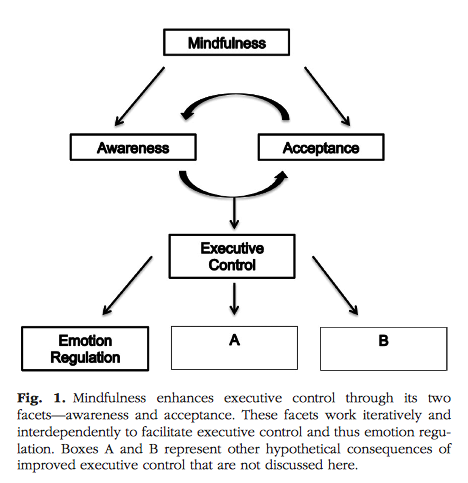 Awareness allows “people to more closely attend to those instances when control is needed.” (Teper, Segal, & Inzlicht, 2013,  pp. 2-3). Whereas acceptance “fosters nonjudgemental openness to primary sensations,” and therefore “people can respond efficiently to affective signals that are vital in initiating adaptive behavior (i.e., regulation) instead of elaborating on them or suppressing them.” (Teper, Segal, & Inzlicht, 2013, p. 4.)

In Katrina’s case, she first became aware of her anger by noticing sensations in her body. Then she accepted her anger rather than acting it out or suppressing it, and this enabled her to choose to regulate it through breathing. Theories of self-reflexiveness, according to Brown, Ryan, and Creswell (2007, p. 7), show that the simple act of “turning inwards is a key to healthy self-regulation” because it can change habitual reactions. Sarah and Katrina, by turning towards themselves, were able to stop habitual emotional reactions and move towards healthier responses. Casey also emphasized the importance of awareness skills for emotional regulation: “It can’t be either/or social emotional learning or mindfulness. It has to be both, because mindfulness teaches the skills that are beneath the behaviors.” These skills include “monitoring behavior, learning to start, stop, and change” and “learning to focus your mind.” (Casey, D., personal interview, August 4, 2015)

The Future of Mindfulness in Vermont

Casey believes we need to shift the focus of mindfulness education to our entire communities:

I think it’s so interesting and ironic that we put so much emphasis on the students and the needs that they have, but I think it’s much needed for teachers and adults and community. I see no difference. The development of students is a reflection of the development of the adults in their lives and the communities in their lives. (Casey, D., personal interview, August 4, 2015)

In Winooski the community is embracing mindfulness, which has been brought to town meetings and the police department. (Modern Mindfulness, 2015)  When I asked Casey what impact mindfulness education could have on changing the long-term culture of Vermont schools, she replied that it could be “incredible.” I am convinced that she is right.

Rempel, K., (2012). Mindfulness for children and youth: A review of the literature with an argument for school-based implementation. Canadian Journal of Counseling and Psychology, Vol. 46. No.3, 201-2220.

Weiss-Tisman, H. (2015, April 29). Vermont has the highest rate of students with emotional disturbance. The Brattleboro Reformer. Retrieved from http://www.reformer.com/news/ci_28016440/vermont-has-the-highest-rate-of-students-with-emotional-disturbance

Mandy Snyder: I work as a personal chef and a teacher of dance, including Authentic Movement & Contact Improvisation. The meeting of creativity, mindfulness and inner transformation is my passion, and I enjoy the teachings of the Enneagram, Nondual wisdom and Sensory Awareness. I grew up in Vermont, then moved to the San Francisco Bay Area for 15 years. Last August I returned to my Vermont roots and I am so grateful to be back in this gorgeous and hardy state.

View Mandy’s other article about Andrea Stander and Rural Vermont.