For centuries agriculture has been at the heart of Vermont’s heritage, culture, and economics.  Some farms have been passed down from generation to generation since the late 1700s, but modern day farmers increasingly are having a difficult time finding laborers to perform the essential tasks to keep the industry afloat.  Many migrant and seasonal farmworkers (MSFW) of Hispanic origin are immigrating to Vermont to fill that gap.  Their need for work combined with their work ethic make them desirable employees for Vermont farmers.  Without their contributions, Vermont’s diary industry, including Ben and Jerry’s and Cabot Creamery, could not survive.

This trailer for the documentary, “Under The Cloak of Darkness: Vermont’s Mexican Farm Workers,” offers a great overview of the issue:

There are an estimated 1500 to 2000 undocumented migrant laborers working on Vermont dairy farms. (Picard, 2010) The Journal of Community Health Nursing did a study to determine the health needs of migrant farmworkers. While this study was done in the Northwest, the results mirror health needs of Vermont farmworkers: “Numerous factors coalesce to place MSFW at risk of poor health outcomes.” (Anthony 2008)  These include fear of deportation, lack of transportation, language barriers, and long work hours, all of which present unique challenges for these valuable members of Vermont’s society. These barriers isolate and in a sense imprison them to the rural farms where they work and live.  Under these circumstances they struggle to meet their most basic needs.  “Many put in 70- to 80-hour work weeks, surviving on little sleep and only one meal per day. Most rarely leave their farms for fear of arrest and deportment.” (Picard, 2010)

Theorist Abraham Maslow (1943) is known for the theory Maslow’s Hierarchy of Needs.  This theory asserts that in order to achieve psychological health an individual must first meet the most basic physiological needs. As demonstrated in the pyramid below, the most basic needs are represented in the wide base at the bottom, and the ultimate goal, psychological health, is at the pinnacle. 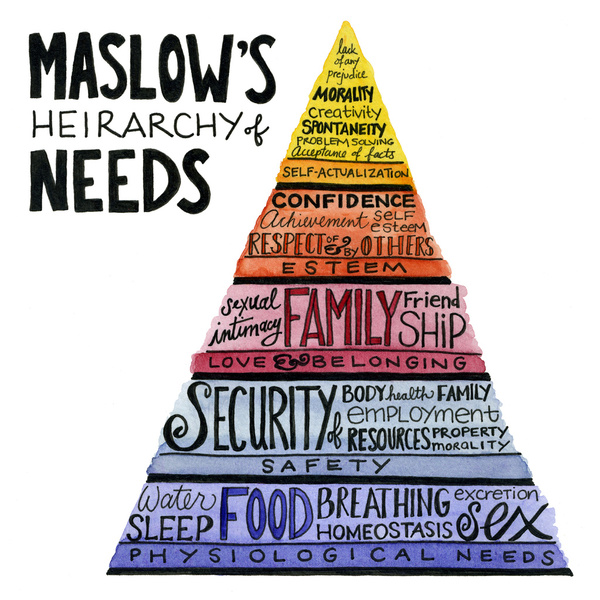 In order to achieve psychological or mental health, migrant farm workers must first be able to meet their most basic needs. Seven Days reporter Kathryn Flagg chronicled the struggle to obtain these basic needs without a driver’s license. “Right now migrant workers are fully dependent upon other drivers to meet basic needs like going to the grocery store, attending church services or making a doctor’s appointment.” (Flagg, 2013)  They have limited access to the lowest level of essential needs, and until those are met they can’t feel secure, make friendships, and in general achieve psychological health.

Julia Doucet is an outreach nurse who helps provide healthcare to uninsured Vermonters.  She reported, “In 2009 about 10 percent of the clinic’s patients were migrant farmworkers. Since then, that percentage has climbed to about 60.” (De Siefe, 2015)  She pointed out many of those clients reported problems that are mental or emotional in origin. “What are we going to do to treat the anxiety and depression that is, by nature, present in this population? The isolation, the loneliness; your family is far away and your culture is far away.” (De Siefe, 2015) We cannot begin to provide for their psychological needs until their physiological needs are met.

As part of my service learning project I was able to assist one migrant family by bringing them to a doctor’s appointment. After the appointment Soledad (name changed for privacy) asked, very hesitantly, if we had time to go to the grocery store? When we were done there she asked if it wasn’t too much of a bother, could we stop at the Dollar Store? She also asked to go to a thrift store, but I was out of time. I am certain we could have spent a great deal of time going from store to store so that she could personally choose the food and clothing items she needed for her family.

At one point she suddenly became very quiet, and when I looked back at her she was frozen. When I asked what was wrong she pointed and I saw a border patrol vehicle. This matches what I had read from a 2010 study on the health of migrant workers: “A number of significant barriers, such as fear of encountering immigration officials made it difficult for respondents to access health care.” (Chappelle & Baker, 2010) For Soledad this fear is even greater because she lives in the northern part of Orleans County near the Canadian border. I learned from her that the border patrol passes by her house several times a day, and that she is afraid to even play outside with her children for fear of deportation.

A Golden Cage is a project that seeks to give a face and a voice to this largely hidden population. Click on the link to the following audio slideshow, which tells the stories of Vermont farmers and migrant farmworkers and the fear of deportation that they face:

Vermont is a fairly progressive state when it comes to undocumented immigrants. It is one of the first states to allow undocumented immigrants to drive with operator’s privilege cards. Advocacy groups are pleading with Governor Shumlin to become the next governor to reject the federal government’s Secure Communities, a program designed to deport undocumented immigrants with a criminal record. Unfortunately, many immigrants without criminal records are being caught. Law enforcement officials are supposed to use unbiased policing, and according to a Seven Days report Attorney General William Sorrell is asking that police take a “don’t ask, don’t tell” approach to immigration status for crime victims and witnesses.” (Bromage, 2011)

That becomes difficult in a state that lacks diversity. It is very easy to single out immigrants based on the color of their skin. “Because Vermont has so few people of color, Mexican migrants are especially vulnerable to illegal racial profiling.”(Lindholm, 2008) Undocumented worker Erick Diaz went to the statehouse in Montpelier to advocate for migrants having access to operator’s privilege cards and was impressed that he had a voice there, but even so he feels that “after so many months and years of laying low, striking out independently is a frightening prospect. Still, he adds, “We have to get out of those shadows.” (Flagg, 2013)

Lauren Cornelius is a long time Vermonter hoping to be adopted into the four generation Vermont woodchuck clan. While she has left Vermont several times, these Green Hills always call her back. She grew up in Huntington, Vermont, and currently resides in Craftsbury with her husband Aaron and their four children: Sophie, Ben, Jacob, and Noah. Lauren has attended several colleges and has several degrees and certificates, but has finally found her career as a nurse. She is currently working as a Licensed Practical Nurse and will graduate May 2016 with an Associate’s Degree in Nursing. Lauren loves the outdoors, photography, baking bread, and eating ice cream (written at the request of the youngest Cornelius). Wherever you find her she is likely to have a smile on her face and her hands full (mostly because it keeps her out of trouble!).