When children misbehave, the first reaction of many adults is to punish, whether by taking away a privilege or an item or by imposing a task that is considered unpleasant. In elementary school, common punishments include time-outs, loss of recess, time spent in in-school suspension, extra schoolwork, and the forced writing of apology letters. Are they doing more harm than good?

As a parent and a substitute teacher, I have been responsible for the care of many elementary-aged children and I have wondered whether these punishments are actually effective. My own children frequently repeat misbehaviors at home, and I see similar results among the students at school, despite the best efforts of the adults involved. If these punishments don’t work, why don’t they and why do we continue using ineffective strategies?

In the following video, author Alfie Kohn humorously portrays what goes on in the mind of a child who has just been given a time-out.

As Kohn points out, this type of “[p]unishment doesn’t focus kids’ attention on what I did, why it wasn’t the right thing to do, what else I should have done. It gets them focused, basically, on just avoiding punishment” (naturemum, 2008). I was curious if this were really true, so I decided to survey a group of students at Academy School in Brattleboro, VT. I asked them a variety of questions to learn whether they had ever been punished at school, and if so, what kinds of reactions they had to their punishments.

Also of interest in my results were the student responses regarding how they felt about the punishments they received. I asked if the punishments were fair, who the student directed any anger toward, and whether the student felt inspired to avoid getting caught or do better in the future. Their answers displayed more understanding of the reasoning behind the punishments than Kohn would have predicted, as shown on the chart below. 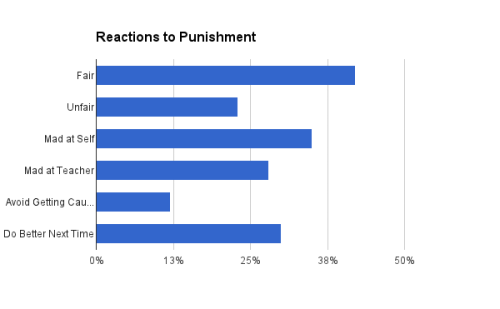 Why would these students react differently than the children Kohn describes in his research? Information from the Vermont Agency of Education indicates that the standards for discipline in the state’s public schools are fairly progressive, stating in “Building Effective Strategies for Teaching Students with Behavioral Challenges” that “[t]he aim of school discipline is to foster within students the essential internal controls to navigate the school day successfully” (Vermont Department of Education, 1999, p. 3). To achieve this level of self-discipline, staff at the public schools is provided training in “[u]nderstanding and applying the school’s discipline philosophy, procedures and practices… [u]nderstanding the relationship of needs to behavior… [and d]istinguishing punishment from discipline and responsibility” (p.4). The discipline used in the Vermont public school system has been designed to promote the students’ taking responsibility for their own actions and appreciating the reasoning behind any consequences those actions have, positive or negative.

One of the ways teachers can encourage their students’ responsibility and self-control is through the use of goal setting and self-evaluation. Educator Steve Reifman provides some tips for helping improve children’s behavior in school in the following video, suggesting setting a broad goal like “I will be a better listener” and then breaking it down into smaller, more easily achievable goals like “I will make eye contact” (Reifman, 2012).

In their “Guide to Positive School Discipline,” the Vermont Department of Education quotes a school quality standard passed in the 1999 legislative session: “The school maintains a safe, orderly, civil and positive learning environment, which is free from hazing, harassment and bullying, and based on sound instructional and classroom management practices and clear discipline policies that are consistently and effectively enforced” (Vermont Department of Education, 2006, p.i). This guide promotes the creation of a positive school climate which makes students feel safe and cared for and empowers them to be a part of the maintenance of the pleasant learning environment through good behavior.

Even within a positive school climate, some children may struggle with the presence of reward and punishment systems. One such student is “D,” a second grader who is enjoying school less this year than he has in the past and attributes these feelings to his teacher’s reliance on reward systems and punishments. Through preschool, Kindergarten and first grade, none of his other teachers relied on these tactics to promote positive behaviors. His current second grade teacher awards “compliment points” in the form of tally marks on the board which the class uses to earn rewards such as extra recess or movies. The tally marks can be removed if the overall class is misbehaving. D feels frustrated that the children are not being expected to behave because it is the right thing to do. Instead, their behavior is wrapped up in an artificial reward and punishment system. He hopes that next year’s teacher will not use these strategies. D’s reaction to his teacher’s methods indicates that putting more emphasis on the rewards and punishments than on the behaviors themselves is not wholly effective and can be discouraging.

In their study, “Punish and Voice: Punishment Enhances Cooperation when Combined with Norm-Signaling,” Giulia Andrighetto, et al. (2013) found that providing a message or punishment independently was not as effective as delivering both in tandem. Through the use of a simulation game where participants played rounds involving just a message, just a punishment, or a “sanction” (combined message and punishment), the sanctions resulted in almost 100% cooperation with milder punishments (Andrighetto, 2013, p.5). They reported that their “results show that norm communication boosts cooperation and material punishment serves to maintain it” (p.6), which suggests that in the classroom, having clear rules and norms is important, but there needs to be a material consequence, such as loss of recess, for norm-breaking in order to maintain class discipline.

So, do punishments prevent future misbehavior in elementary age students? My research shows that they can, but won’t always. There is no magic, one-size-fits-all punishment that will correct every child’s behavior at every level of development. Instead, the most effective punishments are those delivered with a clear reason and concrete consequence which directly relates to the original offense.

Reifman, S. (2012). Teaching kids how to improve their behavior in school [Video file]. Retrieved from http://youtu.be/14n4jyVSeyM

Vermont Department of Education (2006). A guide to positive school discipline. Retrieved from http://education.vermont.gov/documents/positive_school_discipline_06.pdf

APA cite this article in References as: Paquette, A. (2014).  Do punishments prevent future misbehavior in our elementary students? Vermont Psychology. Retrieved from http://wp.me/p4elXk-17

Allison Paguette is a substitute teacher working in and studying Early Childhood Education in Brattleboro, VT.